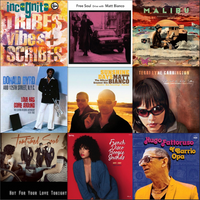 Subscribe directly to this channel to directly support the creators you love and get more.

Download shows to the Mixcloud app to listen anytime, anywhere.

Support the creator and artists fairly and legally.

Listen without limits or ads on the creator channels you support.

In this episode the one and only Mark Reilly from Matt Bianco!
The band was initially formed in 1982 by Mark Reilly (vocals), Danny White (keyboards),...

Get the app on Android now